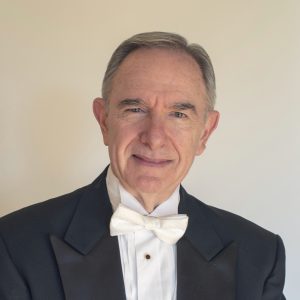 (June 2019)  Michael Burch-Pesses is the conductor and musical director of the Oregon Symphonic Band, Oregon’s premier adult band. A former Navy bandmaster, he has conducted bands throughout the United States, Canada, South America, Europe, Asia, Africa, and Australia, and is in wide demand as a guest conductor, clinician, lecturer, and adjudicator.  He first came to OSB as a guest conductor in 1998 and became their full time conductor in 2002.

Since 1995 he has served as Director of Bands at Pacific University in Forest Grove, Oregon, where he conducts the Symphonic Band and Jazz Band, and teaches courses in conducting and music history. During his tenure at Pacific University the instrumental program has more than doubled in size and continues to achieve ever higher levels of musical maturity. He has received two awards for excellence in teaching from the University, and in 2018 the Oregon Music Educators Association recognized his teaching with the John C. McManus Distinguished Teacher Award, the highest award the Association bestows.

Dr. Burch-Pesses enjoyed a distinguished career as a bandmaster in the United States Navy before arriving at Pacific University, enlisting as a horn player and working his way up through the ranks to become the Navy’s senior bandmaster and Head of the Navy Music Program. During his Navy career he served as Leader of the Naval Academy Band in Annapolis, Maryland. Under his direction the Naval Academy Band received the George Howard Citation of Musical Excellence from the John Philip Sousa Foundation, the highest civilian award for a military band. He also served as Assistant Leader of the Navy Band in Washington, DC, and Director of the Commodores, the Navy’s official jazz ensemble. He is the recipient of the Legion of Merit, the highest award ever given to a Navy bandmaster.