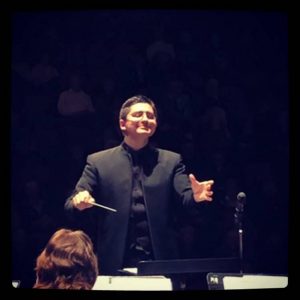 (June 2019)  Eben A. Fernando Heldreth is an educator, composer, and conductor from Portland, Oregon. Growing up in the Portland Metro Area, Eben graduated from Concordia University, where he studied music education and composition, and earned both his bachelor’s degree and master’s degrees. Recently, Eben finished his post-master’s and doctoral coursework receiving a Certificate of Advanced Graduate Studies in Wind Conducting (CAGS) from Messiah College, where he studied with Dr. Brad Genevro, Dr. Jack Stamp, and Dr. William Stowman. Currently, he is studying composition privately with Dr. Jim Colonna and Dr. Jack Stamp.

Currently Eben serves as an active composer, adjudicator, guest conductor, and private instructor. He was the Director of Instrumental Music at Yamhill Carlton School District teaching band and orchestra in Oregon. For three years, he was the music director at Washington State School for the Blind in Washington. He has worked at Evergreen High School as a marching band instructor and jazz director for five years and served as the Music Caption Head and Composer for Westview High School’s Marching Band for two years. He is the Marching Band Program Coordinator for Skyview High School and is the Winds Caption Head and Music Designer for Affinity Indoor Winds. Additionally he is an Executive Officer for the Oregon Band Directors Association.

To learn more about Eben and his work, visit his website (eafhmusic.com). To contact him directly, email him at ebenheldreth@gmail.com.